Thesis description:  The canonical form of a visibility graph is defined in terms of a polygon.  Each vertex of the polygon is used as a node of the graph.  Two nodes are adjacent if the line segment between them does not intersect the exterior of the polygon.  Thus, in drawing all diagonals of a polygon, a realization of a visibility graph is produced.  Alternatively, a diagonalized polygon can be used to create a triangle intersection graph.  That is, associate a node in the graph with each triangle formed by diagonals and edges of the polygon.  Two nodes are then adjacent if the interiors of the associated triangles intersect.

Research Description: The classic ballot problem asks: If two politicians are running for office, what is the probability that the winner is leading during the entire ballot count? This translates nicely into the process of counting lattice paths between two points in the lattice plane.  Research related to variations of this question resulted in [1].

When I received my PhD I decided to do a portrait.  When you get a PhD there are just a lot of detailed requirements to complete or, as is often said  “a lot of hoops to jump through”.  This, along with my juggling, led me to want to do this picture I call “The Final Hoop.” 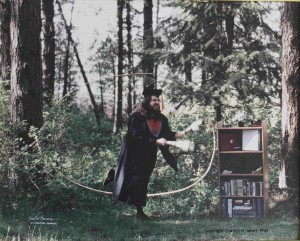